The Briar Street Theater is located in Chicago and is home to the long-running Blue Man Group. Since the building was reconstructed, the theater has put on many different shows and performances. Yet, the Blue Man Group remains the most recognized since 1997.

Built in 1901, the building was used as the stables where the horses used and owned by Marshall Field’s would stay. These horses were meant for the company’s delivery service. Almost 70 years since it was built, Walt Topel, founder of Topel and Associated, Ltd., bought the building from Werner Kennelly Moving and Storage Company in 1970. Topel redesigned it into a sound stage and office where his film production company would thrive from.

From 1977 to 1985, the building was also where Walt Topel’s post-production company, Cinetronic, Ltd. based in. However, this business was later renamed Swell and moved downtown in 1984. In 1985, the theater was reopened and since then it became an important part of Chicago culture.

The Topel family is still the owner of the venue today. Additionally, the original second floor actually hangs from the ceiling by large turnbuckles that can still be seen. 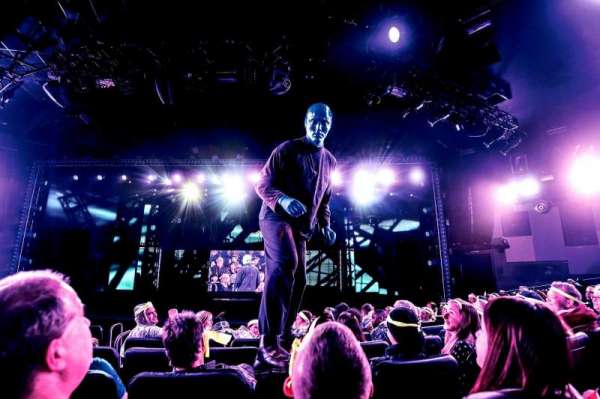 The Briar Street Theater has hosted many performers such as:

The venue also possesses some valuable art within the lobby. Patrons will find exquisite paintings created by artists such as Van Gogh, Brancusi, Stanton, Picasso, and even art created by the Blue Man Group, themselves. Their art is in a form unique to the group such as PVC pipes cover the walls and ceilings as well as digital screens that play unique messages.

Currently, the theatre shows The Blue Man Group. The show consists of three bald men dressed in black clothing with painted blue skin. During the performance, they incorporate the audience through theater, persuasive music, art, science, and vaudeville. They were formed in the late 1980s and have performed in Chicago, Boston, New York, Las Vegas, Berlin, Toronto, and London. In their show, there are elements such as paint, PVC based instruments, and Cap’n Crunch cereal, among other elements.

Since the opening of the Briar Street Theater, singers have not been the only performances held. Other noteworthy productions hosted at the theater have been run by Fox Theatricals are:

For more information on the Briar Street Theatre, please see the specific pages below.